With the continuous development of services such as cloud computing, virtual reality, data communication and high-definition video, the core optical network has been upgraded to ultra-high-speed and ultra-long-distance transmission. In this process, there is a core device that is essential - that is the lithium niobate modulator (LiNbO3). 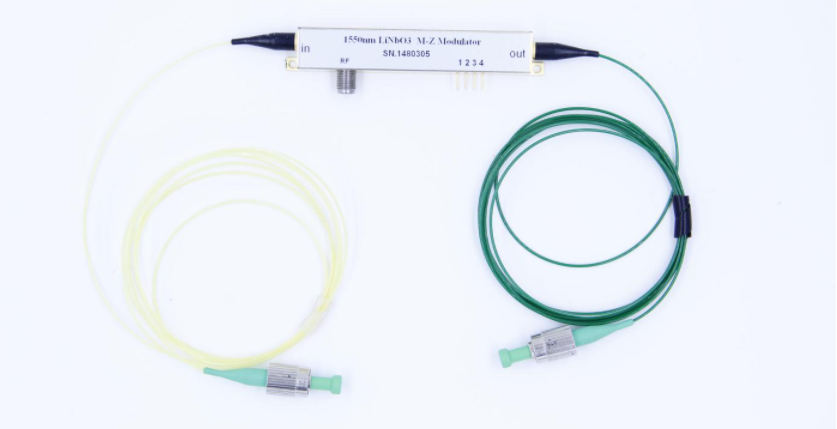 Lithium niobate is a compound of niobium, lithium and oxygen. It is a negative crystal with a large spontaneous polarization (0.70 C/m2 at room temperature), and is a ferroelectric with the highest Curie temperature (1210 °C) found so far.

In addition, the physical and chemical properties of lithium niobate crystals are quite stable, easy to process, have a wide light transmission range, have large birefringence, and are easy to prepare high-quality optical waveguides. It has unparalleled advantages in communication - not only has a small chirp effect, high modulation bandwidth, good extinction ratio, but also has excellent stability, it is the leader in high-speed devices, so it is widely used in high-speed high-speed devices. bandwidth for long-distance communication.

Lithium niobate crystals with near stoichiometric ratios have many excellent photoelectric properties, but their ratios deviate from the solid-liquid eutectic point of the same composition, so the conventional pulling method cannot be used to grow high-quality crystals. At present, the main preparation methods used are lithium-rich Melt method, flux method, diffusion method.

At this stage, the production technology of lithium niobate crystal is mature, and the market share of leading enterprises is relatively large. In the global market, #EPCOS of Germany, #Sumitomo of Japan, and #KorthKristalle of Germany are the top three lithium niobate producers in terms of market share.

In addition to the piezoelectric effect, the photoelectric effect of the lithium niobate crystal is very rich, among which the electro-optic effect and the nonlinear optical effect have outstanding performance and are the most widely used. Moreover, lithium niobate crystals can prepare high-quality optical waveguides by proton exchange or titanium diffusion, and can prepare periodic polarized crystals by polarization inversion. , electro-optical deflection, high-voltage sensors, wavefront detection, optical parametric oscillators and ferroelectric superlattices and other devices have been widely used.

In addition, applications based on lithium niobate crystals such as birefringent wedges, holographic optics, infrared pyroelectric detectors, and erbium-doped waveguide lasers have also been reported.

In 1962, Armstrong first proposed the concept of Quasi-Phase-Match (QPM, Quasi-Phase-Match), which uses the inverted lattice vector provided by the superlattice to compensate for the phase mismatch in the optical parametric process. The polarization direction of the ferroelectric determines the sign of the nonlinear polarizability χ2. The ferroelectric domain structure with the opposite periodic polarization direction can be prepared in the ferroelectric to realize the quasi-phase matching technology, including lithium niobate and lithium tantalate. Periodically polarized crystals can be prepared from crystals such as potassium titanyl phosphate and potassium titanyl phosphate. Among them, lithium niobate crystal is the earliest and most widely used material in the preparation and application of this technology.

The initial application of periodically polarized lithium niobate crystals is mainly considered to be applied to laser frequency conversion. In 2014, Kim designed an optical superlattice integrated photonic chip based on reconfigurable lithium niobate waveguide optical circuit, and realized the high efficiency of entangled photons on the chip for the first time. generation and high-speed electro-optic modulation.

It can be said that the proposal and development of dielectric superlattice theory has pushed the application of lithium niobate and other ferroelectric crystals to a new level, in all-solid-state lasers, optical frequency combs, laser pulse compression, beam shaping and quantum communication. The entangled light source has important application prospects.

The current fifth-generation mobile communication network (5G) deployment includes the sub-6G frequency band of 3 to 5 GHz and the millimeter wave frequency band above 24 GHz. The increase in communication frequency not only requires the piezoelectric properties of crystal materials to be satisfied, but also requires thinner wafers. , The interdigital electrode spacing is smaller, and the fabrication process of the device is greatly challenged.

Therefore, in the 4G era and before, the surface acoustic filters widely used in lithium niobate crystals and lithium tantalate crystals are facing the competition of bulk acoustic wave devices (BAW) and thin film cavity acoustic resonators (FBAR) in the 5G era. .

Optical communication technology is an important part of the construction of the fifth-generation mobile communication network, and the lithium niobate electro-optical modulator, as the core device, will also usher in greater development.

Photons have been widely used in high-capacity communication, optical storage, information transmission, information processing, detection and other fields. Like the development of electronics from discrete components to integrated circuits, the miniaturization, integration, and low power consumption of photonic devices As the requirements for power consumption, modularity, intelligence and high reliability are getting higher and higher, integrated photonics chips will inevitably replace discrete optical components. The development of integrated photonics chips in the early stage was mainly driven by the demand for optical communication, and researches were carried out around silicon-based photonics and indium phosphide-based integration.

From the perspective of single technology development, almost all photonic components have been realized based on lithium niobate crystals, including:

In the currently developed optoelectronic material system, it is rare to develop so many basic optical components, photonics devices and optoelectronic devices based on the same host material, which also makes people have doubts about the future development of lithium niobate crystals in integrated photonics chips.